Living with a Ferrari F40

I have been fortunate enough to own a Ferrari F40 for twelve years now. Dropping down behind the steering wheel is as exciting today as the first time I drove it. Mine is an original Italian delivered car and one of the last ones produced in 1992. I bought the F40 from a Ferrari dealer in Germany who had purchased the car from its second Swiss owner. As a late production F40, it is fitted with both cats and the adjustable suspension. The latter has been real wallet savior as I am sure I would be on my tenth new front spoiler without it.

Running the F40 is not exactly inexpensive but it is also not the bank balance destroyer many legends would like to have you believe. Like any car that is over 25 years old now, just about all the original perishable items have reached the end of their serviceable life and need to be replaced. If you do this as a “rolling restoration” in conjunction with the annual service and address a different area each year, it becomes much more financially manageable. The other key to keeping an F40 in great condition is regular use. Over my decade plus of ownership, the F40 has averaged about 3000 km annually. Included in this mileage is a trip back to Maranello and a couple of long cross European jaunts. For a car that was launched 30 years ago, there is nothing about it that feels dated, just wonderfully raw and focused.

Open the fly weight door, drop down into the red racing bucket, push the clutch in, turn the ignition key, press the started button, and the engine immediately bursts into life. For the first several minutes, it revs to 2000 rpms until the cats heat up and then drops to just under a thousand. Wait for the water and oil temp gauges to start swinging north, and then you can gently head towards the open road. Give it 10 miles to heat up properly and the fun begins. Drop a gear, gently give it some gas, wait for the revs to build to just over 3000 rpm, check that the road is straight, and then push the far right pedal towards the floor. First you hear the turbos starting to whistle followed shortly thereafter by a strong shove back and down into the seat then all hell breaks loose. The nose lifts slightly as the rear bites down, and with little additional warning you are launched brutally forward down the tarmac. At 6800-7k rpm shift quickly up, and enjoy the ride. After dozen years, that experience is just as special today as it was the first time. 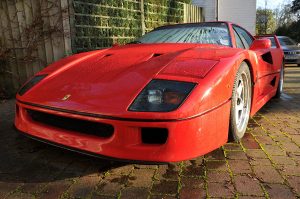 Hi if your car has larger turbos does it have more turbo lag?

No, has about the same as the stock turbo

I came across your blog through Pistonheads, it’s good to see a proper drivers car being properly driven regularly!

Keep up the great work 🙂