Living With a Koenigsegg CCR

I wrote this several years ago on my experience owning a Koenigsegg CCR. Its a car that I have very fond memories of and would definitely consider reacquiring.

I have had the Koenigsegg CCR for around a year now. The Koenigsegg is designed to be very very fast in a straight line and to do it with a relatively high degree of slightly quirky Swedish comfort. This it does quite well, even before you get out of 2nd gear. The dashboard layout is very different but works quite well once you figure it out. The dial and display is very readable in all light conditions, much better in fact than the digital display on the F50. The center consul which houses a large number of key controls, is baffling at first but quite logical once you figure it out. Between how the immobilizer works and the start up sequence however, my concern for someone jumping in it and driving off is about zero. The pedals are offset towards the center of the car and you sit low in the full carbonfibre tub. The front windscreen is quite large and it wraps around a lot of the front end. The front corners are not visible from the driver’s seat and it does take a bit of time to get comfortable with the cars dimensions on the road. It is a bit shorter than most supercars but feels slightly wider. It isn’t wider, but because it is shorter, it feels like it is. On a B road, you are aware that you are controlling a fair amount of the real estate. It is not hard to place on the road, but you are always aware of the width. The turning radius rivals that of a small supertanker and tight corners need a bit of advance planning. What sets it apart though is what happens when you put your right foot down. Acceleration is impressive from the moment you pull away, however get aggressive on the gas pedal, and the horizon just smacks you in the face On top of being pressed back into the comfortable bucket seats, the sound of the supercharger spinning up (it is located right behind the driver’s head), is both thrilling and terrifying at the same time. Brakes are great, thankfully, given the viciousness of the acceleration, and overall balance of the car is quite good. The gearbox however is quite demonic and the first couple times you drive it, finding the gears is an adventure. The gear shift lever is very tall and the space between the gears very tight, therefore slotting from one gear to the next is a craft to be learned. Once you get it, at high speed, it all makes sense. In any event, as it is geared for 240 mph, the gearbox is not something that you need to be constantly working. The clutch is medium weighted with a high bite point which serves to add a bit of extra excitement when initially trying to master the gearbox. The noise the 4.7L V8 makes is more guttural than Italian style screaming.

Gearbox is a 6 speed H pattern. It was specially developed by Cima for Koenigsegg. The engine is built off a Ford racing block base, V8 cast aluminum, 4 valves per cylinder, with double overhead camshafts. The cam cover is carbonfibre and the engine is fitted with a dry sump with unique oil spray piston cooling. The twin Rotrex superchargers spin to a 1.2 bar boost pressure good for 806 bph at 6900 rpm. Other than the block, the rest of the engine internals are Koenigsegg developed.

The Koenigsegg is not an easy car to drive by any stretch of the imagination but it is a fun car to drive. It demands a very high level driver involvement at all times. You always feel both like you are sitting in something very special and that it could bite you if you let your guard down at any time. That having been said, I have now driven it at night on the highway in the rain, thru the middle of London during rush hour, on long country drives with friends, and to the supermarket. In all these situations it behaved impeccably. With the roof on, it is a bit cramped and claustrophobic, with it off, it is just great. In a straight line, it adds a whole new dimension to quick. I have kept it on a battery conditioner when not using it and have never had any of the electrical problems you hear about on some of the forums. The windows are programed to drop when you open the doors and sometimes seem to have their own agenda. The front nose lift has been very helpful in terms of getting over speed bumps, and it is fairly easy to get the roof on and off. Like any supercar, learning the flow between the three pedals, steering wheel, and gearbox is key. Servicing so far has been quite reasonable and straight forward. In terms of reliability, it has been perfect and not given me a single problem. I credit this to some extent to the Koenigsegg getting regular and consistent use.

Net net, I think it is a vastly underrated supercar. It may not have quite the exotic lines of the Zonda, but it is very special in its own right. It is definitely a car that you can cover huge distances in very quickly and comfortable. Taking it out on a track would require a fair amount of intestinal fortitude. It can be hustled down a country lane smartly, but you need to respect all 800+ bhp sitting behind your back.

It has now been a year since I parted ways with the Great Green K’egg. Do I miss it? In a strange way yes. It is such a unique quirky car, it’s hard not to like, similar to that friend that you don’t see very often but enjoy spending time with when you do get together. If I had a ten car garage, the Koenigsegg would definitely merit a permanent place. With only half that, it was tough to argue that it should be a long term keeper. The Koenigsegg was engaging and fun to drive as a Barchetta, but claustrophobic and uncomfortable to drive as a Coupe. The strong preference for the open top configuration created a second complication as storing the roof panel eliminated the modest amount of luggage space in the front. The K’egg did not have an emergency soft top, so unless you are willing to take the risk of becoming a small fast moving pond on wheels, you really could not venture too far from home without lugging the roof panel with you. The net effect was the K’egg could only be used for day trips, which given my penchant for multi day road trips, became a great limiting factor. Even the Ferrari F50 has enough luggage space to accommodate a lightly packed weekend away.

I am glad I owned the Koenigsegg. My car history is much richer for it. So far I have owned two cars that were developed under the watchful eye of the man whose name was affixed to the rear, the Mosler MT900S & the Koenigsegg. Both have been great cars in their own right and very positive ownership experiences. Both have a clear focus and well defined idea on what they are trying to be. A huge amount of the charm and appeal comes from this. 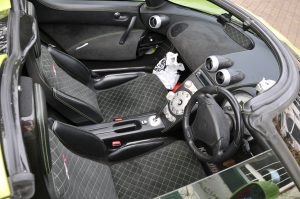 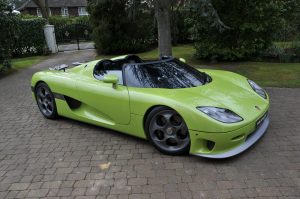 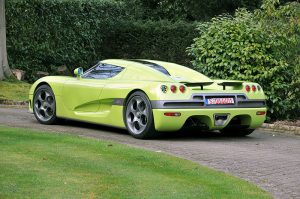 Lovely article. Had the pleasure to drive a CCX (with a sequential straight-cut gearbox) and thoroughly enjoyed it. Felt similar to my Ruf ctr3 which I just let go of and would echo the 10-car garage limitation.

[…] of other small supercar manufacturers: Mosler ( Our Mosler MT900S) and Koenigsegg ( Living with the K’egg CCR).   On the first, that was really just a matter of cash flow planning. The second is […]