Recently I asked for ideas for future articles, I got a lot of requests about maintenance costs.   I believe at the time I replied that it was a highly dangerous topic given Mrs. SSO does read all the articles I post.  However, I’ve decided to take the risk and will do so in several parts.  First, I’ll cover the Ferraris, then the McLarens and finally all the others.  I have always tried to be quite religious with annual services which I’m sure has helped finance better lives for quite a few very talented mechanics.  In addition, any issues that come to light during these annual pilgrimages to the service center get taken care of right away.  My philosophy has always been that small problems only grow into big problems and it is much less expensive to take care of things immediately than to wait.  As a reference point, when evaluating the annual maintenance costs (I define maintenance as annual servicing cost plus replacement of wear & tear items), I take into account the original list price and not our acquisition cost.  A car that cost $250,000 new is always going to have $250,000 car type service costs regardless of what you might be able to buy it for a lot less 5 or 10 years later.  Unfortunately, unlike a car, service costs don’t depreciate over time, if anything they move in the opposite direction as more of a car’s components wear out and need to be replaced.

In no particular order here is a bit of our maintenance cost history.  For the sake of simplicity, I have kept the costs in the currencies they were incurred in. 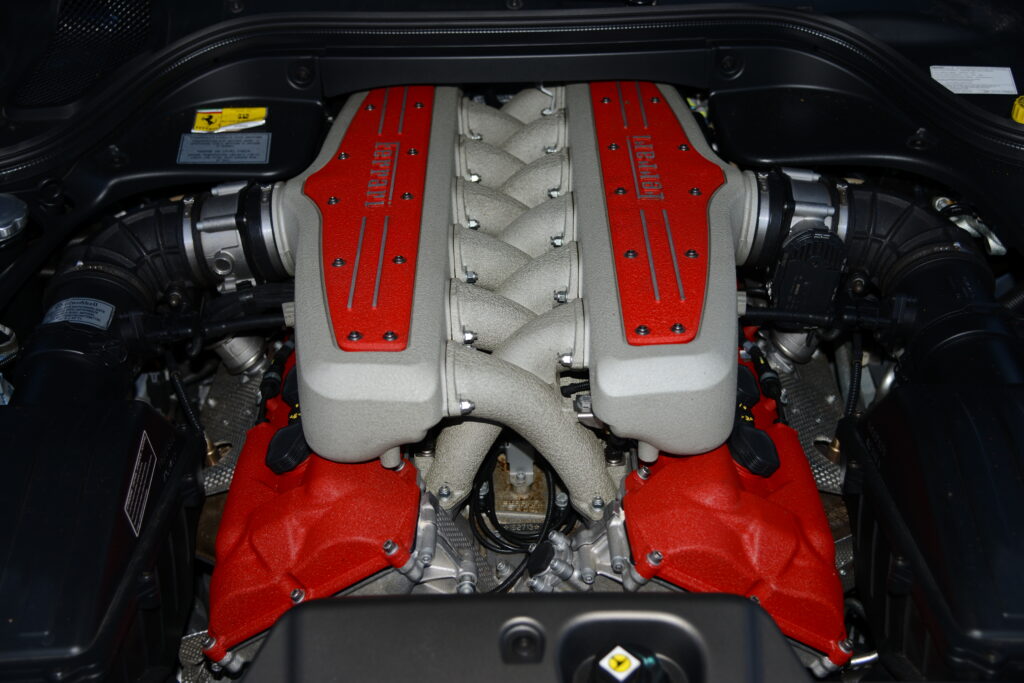 Ferrari F50 – We owned the F50 for 7 years and the total maintenance costs were £ 29,750.  In fact, looking over the service invoices, this included £13k for the once every decade fuel cell replacement and £5k for a new clutch shortly after I purchased the car.  The clutch replacement was not due to wear but caused by a seal that had failed due to lack of use as the F50 had sat unused for several years before I purchased it.  While the grand total of the services invoices was just under £30k, when you take out the £13k for the fuel cell and £5k for the clutch, the annual servicing costs averaged a quite reasonable (for a limited-edition Ferrari Supercar) £1.7k.

Ferrari 308 GTB – We owned the 308 GTB for just over two years.  This was the fourth 308 GTB built and as an early fiberglass model I was hoping it would be largely immune to rust.  The first annual service was a very reasonable €460.  Turned out I was wrong on the rust and there was plenty of hidden in the door frames.  The second however was a bit more involved and included an engine rebuild repairing the door frames.  The total was €11,790.  In fact, the maintenance cost on the 308 GTB in the two years I owned it equated to just under 50% of its purchase price.

Ferrari 360 Modena – The 360 Modena had a place in our garage for 2 ½ years.  In that period of time it was serviced 3 times.  The first service was basically just an oil and filter change for £710.  The second service did much more damage to the wallet as the 360 was due for a cambelt change and there were a number of other issues that needed to be attended to including the motor mounts.  The total bill on service #2 was £4,910.  The third and final service which included a respray of the front bumper was a much more palatable £1,225 bringing the total for the 2 ½ years to £6,845.

Ferrari 430 Scuderia – During our relatively short year together, the 430 Scuderia made two trips to the Carrs Ferrari Service center.  The first was for an annual service and four new tires.  The bill for this came to £2,340.  The second trip was for a windscreen repair for £45.

Ferrari 16M – This was our first US based Ferrari.  We owned it for just under two years.  It made one trip to Boardwalk Ferrari for an annual service.  Total bill was $2,640.  This annual service was basically for liquids and filters.  Labor charges were $1,870 of the $2,640.

Ferrari 599 GTB HGTE – The 599 GTB was another 2-year Ferrari for us.  While it was only serviced once at Boardwalk Ferrari at a cost of $3,060, it also rang up a bill of $5,200 for new wheels after losing a battle with a pothole on the New Jersey turnpike which was followed shortly thereafter by four new tires for an additional $1,590.

Ferrari F40 – We have owned the F40 for 14 years so it’s no surprise that it has run up the biggest tab.  Total maintenance costs to date are £52,930 for the first 12 years in the UK and $5390 since we brought it over to the US.  The £52,930 includes two new clutches at about £3k each and the once every decade fuel cell replacement for £9,000.  The fuel tank replacement on the F40 is not as labor intensive as the F50 so the cost is slightly more reasonable.  The first new clutch was due to normal wear and the second due to a leaky seal caused by an extended stay in storage.  As part of the normal serving schedule, the cambelts on the F40 require changing every 2 years.  Unlike the 348, F355, Testarossa, and BB’s which the engine to be removed to change the cambelts, on the F40 the cambelts are accessible via a panel behind the seats so it’s a much simpler job.   In addition, reupholstering the seats was £3,700 and we had the suspension system refurbished for £6,500.  Other on-going “rolling restoration” expenses for alternators, AC compressors, new fuel lines, etc. are included in the annual maintenance costs.  The F40 has also been through 3 sets of tires as we change them every 3-4 years regardless of wear.  If you take out the fuel cell, clutches, seats, and suspension, the average service cost per year for the F40 in UK was £2,310.

For the Ferraris that we have owned but are not included in the above list, it’s because we either owned them for too short a time to have any meaningful maintenance history or the records have disappeared in one of our many moves.

I’m not sure what conclusions to draw from this exercise other than Ferraris are not inexpensive to run.  The annual maintenance costs have little to do with the current value of any model, but the service costs are fairly consistent across the range at about £2k per year.  It’s the “wear & tear” items like clutches and fuel cells that really generate the big bills.  Newer Ferraris in general are less expense to run than older models and service costs in the UK seem slightly more reasonable than the US.  I’m not going to add them all up as that just seems unproductive.  Anyways I am sure Mrs. SSO, who is very quick with numbers, will be in to see me for a discussion shortly with the grand total in hand.

More on our complete Ferrari ownership history is in these two articles:

P.S. All of the maintenance work on our Ferraris in the UK was done by Carrs Ferrari in Exeter.  They are outstanding and I would highly recommend them.

Next up will be our McLaren Maintenance Costs.

[…] decided to take the risk and will do so in several parts.  The first part covered the Ferraris (Ferrari Maintenance Costs) and this article will focus on the McLarens.  I have always tried to be quite religious with […]

Another excellent insight into super/hyper car ownership.. looking forward to seeing the figures for servicing the Mclaren’s. I’m liking the updated site.. Much easier to navigate.

Good article, some of the expenses seem quite reasonable, even compared to some more affordable and non sports cars. I imagine some of the non-maintenance costs (registration, taxes, insurance, gas) could hit the wallet more.

Registration and tax really depends on the country or state. Some are really high, others quite reasonable. Insurance as a percentage of value is not too bad. Gas mileage….not so great.