Our weekend road trip to Houston was inspired by SSO finding out that a Yauatcha Restaurant (a sleek, modern Chinese resturant serving spectacular dim sum) had recently opened. Yauatcha is one of our favorite restaurants in London, so we thougth it well worth a trip to Houston to check out this new location.  I had no issue making a dinner reservation for Saturday night, which I did think was a bit strange given we need to book ages in advance in London.  Anyway with reservation in hand the trip was a go.

I went online to book a hotel via the American Express Platinum Fine Hotels and Resorts website only to find only 2 options:  the Four Seasons or the St. Regis.  Well actually, there was not much of a choice as the Four Seasons is downtown in the business district (the area is dead on the weekends) so the St. Regis it was. We tend to use the Amex Fine Hotels & Resort Hotels as the package is quite appealing (early check-in, late check-out, upgrade of room, wifi, full breakfast for two, $100 Food & Beverage credit, etc).  These hotels also have safe parking, a key consideration for us when taking the McLaren 650S Spider.

I checked the weather in Dallas and Houston. Cloudy both days but at least not cold and rainy or at least that’s what the forecast was indicating.  Not great but at least ok for driving and getting around the city.

Our two small duffle bags were packed, dropped into the nose of the McLaren, and we were off.   We had no issue getting out of town as it was Saturday morning around 8:30am.  About 45 miles down the highway the blue “frost” warning light came on and the “Winter” mode got activated.  The trees on both sides of the highway were covered in ‘Rime ice’, a unique frost that forms when the conditions are just right.  SSO was not amused to say the least.  Oh wait, it gets better. It starts to rain, and heavily.  Note to self, check the weather on route in addition to departure and destination point.  While the two cities are only 4 hours apart, the weather in-between was completely different.  Despite the barely above freezing tempatures and pelting rain, we made pretty good progress. The 650S Spider stayed glued to the road and we only slowed down a bit for visibility reasons. 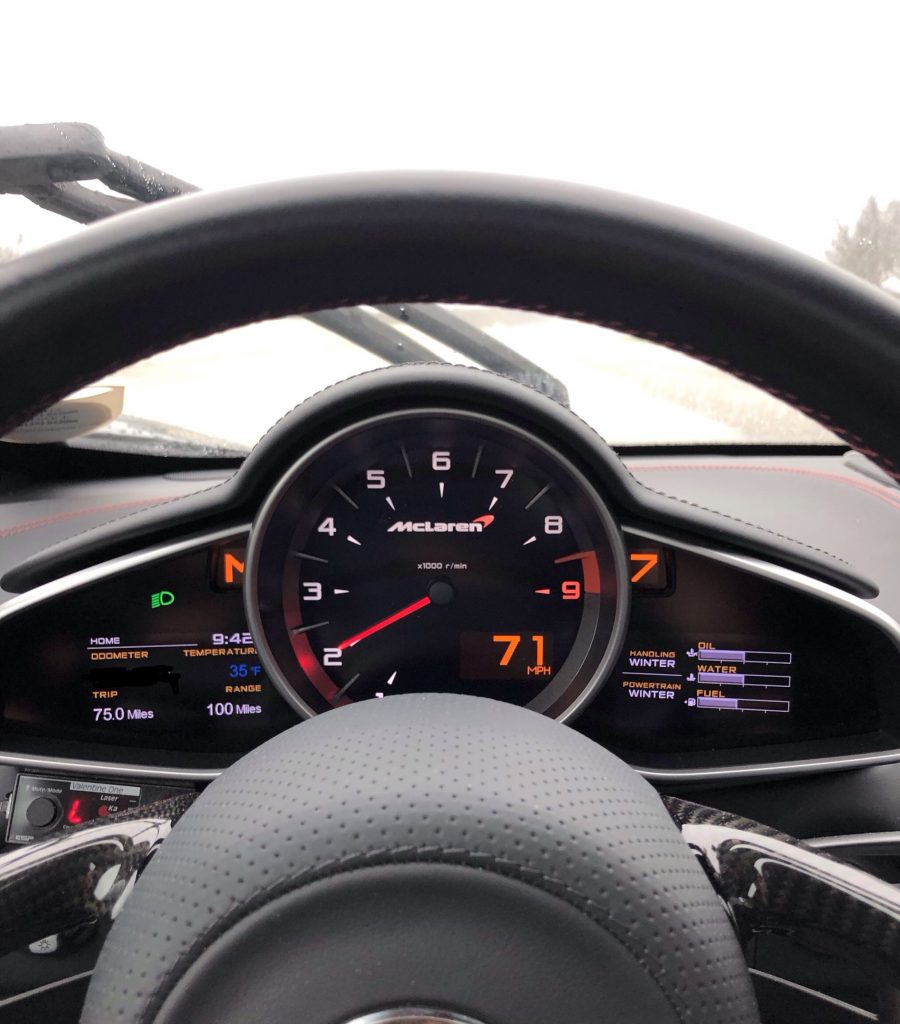 An hour from Houston, the rain stopped but the potholes and traffic began.  We checked traffic and routing on Google maps and Waze but their reports were the same as the McLaren Sat Nav was showing.  Major ring roads closed (Houston has a lot of loops to navigate this sprawling city) for construction and a few major accidents.  Second note to self, check for road work before heading out as the sat navs don’t always pick them up.  Almost an hour after we had hit the outskirts of Houston,  we finally pulled into the St. Regis.

We parked the McLaren 650S Spider directly in front of the hotel.  The valets seemed happy to have it ‘displayed’ out front.  Our bags were whisked away (seriously, we can carry 2 small duffle bags but the Porter was very firm in that not being an option).  A delightful receptionist checked us in and informed us of a double upgrade based on both the Amex Platinum package and SSO’s Starwood status. 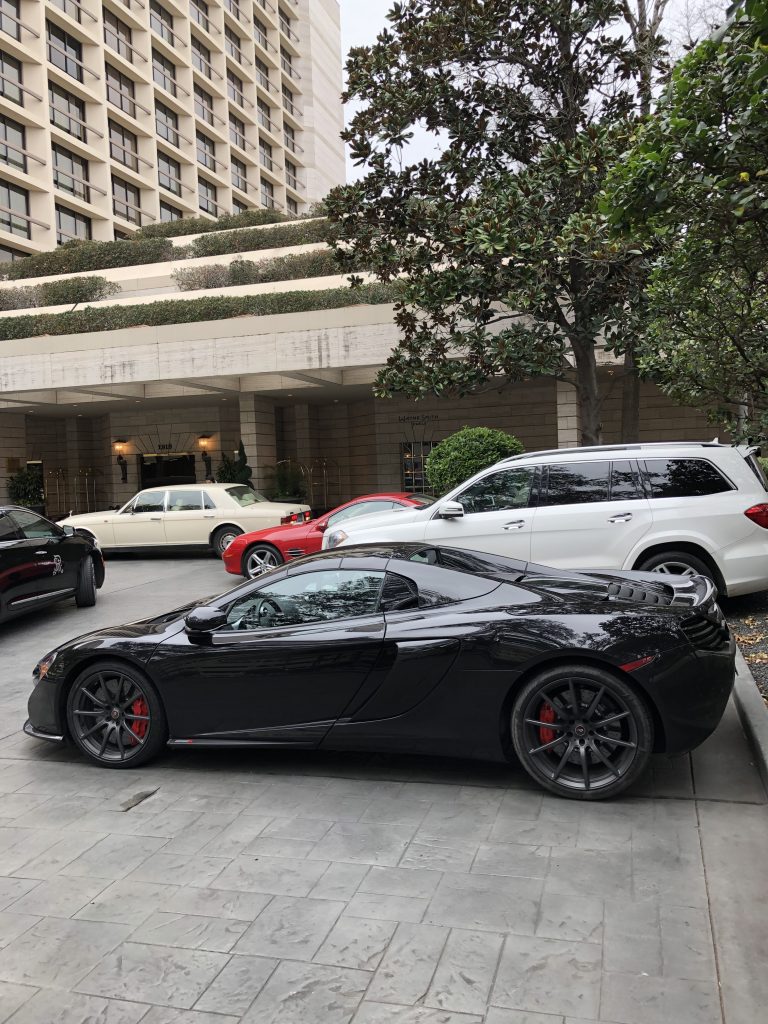 Indeed our room was massive. Other than that, not much to write about unless you are into a dozen different shades of brown.  Don’t get me wrong, nothing bad about it, it had all the essentials (illy coffee machine for our double espressos Sunday morning, lots of pillows, and amenities, plus it passed the hanger test (i.e. proper wooden hangers that are not connected to the bar and silk hangers for me).  The room décor just seemed quite dated. 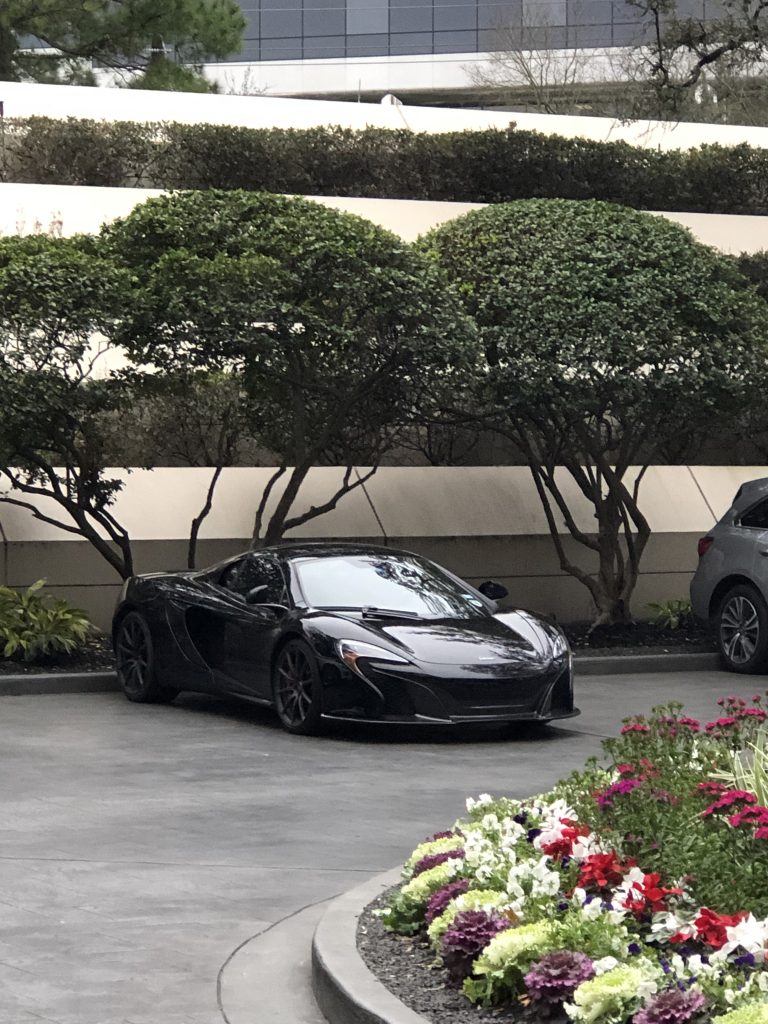 We were starving so we unpacked and headed out to lunch.  The St. Regis has a wonderful driver for short trips in the area.– perfect as we did not want to move the McLaren and subject it to more pothole abuse. I knew there was an Hermes not to far, so figured there must be some nice restaurants in the area.  The driver told us of 3 so we checked them out and decided on Le Colonial, a French-Vietnamese restaurant.  The décor was beautiful and the restaurant was packed at 1:30.  Having spent several yesrs living in Asia, SSO normally orders quite well so I let him take control of the menu.  The food was phenomenal!  We quickly checked if they had other locations in the Us.  Le Colonial is now on our radar for Chicago when we go next.

We wondered around the shops in the area, of course lingering at Hermes.  No worries as they always take good care of SSO, San Pelligrino on ice and a comfortable chair, he is set for at least 15 minutes which gives me time to shop.  And so I did. We then wondered over to the Galleria, an upscale mall not to far away.  I’m glad we walked, as SSO and the McLaren would not have been happy with the potholes and insane traffic.  Nothing to exciting so we soon decided to return to the St. Regis.  After calling an UBER and watching it circle the area cluelessly 3 times, we cancelled and jumped into a cab. When we asked the cab driver to turn on the meter, he told us it would be a flat rate of $10 (double the UBER fee).  We tried to explain it was the principle and our right, he promptly opened the doors and told us to get out.

Finally back at the hotel after our taxi adventures (Houston has by far the rudest most aggressive cab drivers we have ever run into), we relaxed for a bit and got dressed for dinner. The St. Regis driver then took us to Nobu for cocktails to meet friends who live in the area.  Cocktails and some sashimi ordered, it was time to start catching up.  They shared their stories of the Sundance Festival and their plans for a trip to South Africa.  As we have both spent time in South Africa we shared tips on both restaruants and places to see.  SSO also had a few airline insights and recommended getting the upgrade to First on Emirates as you have your own room and on-board shower.  Another round of cocktails and some more sashimi and it was time for us to go to head over to Yauatcha.

Yauatcha was a short walk from Nobu.  We arrived on time and were ushered to our table.  The décor and ambiance were not on par with London, close but not quite. The menu was the same but the food and service, like the décor, aren’t quite up to the London location’s standards. We ordered all of our favorites and indulged.  It is certainly more convenient than going to London and it did give us our dim sum fix.  Having learned the hard way earlier, we avoided the taxi rank and called the St. Regis to come pick us up. 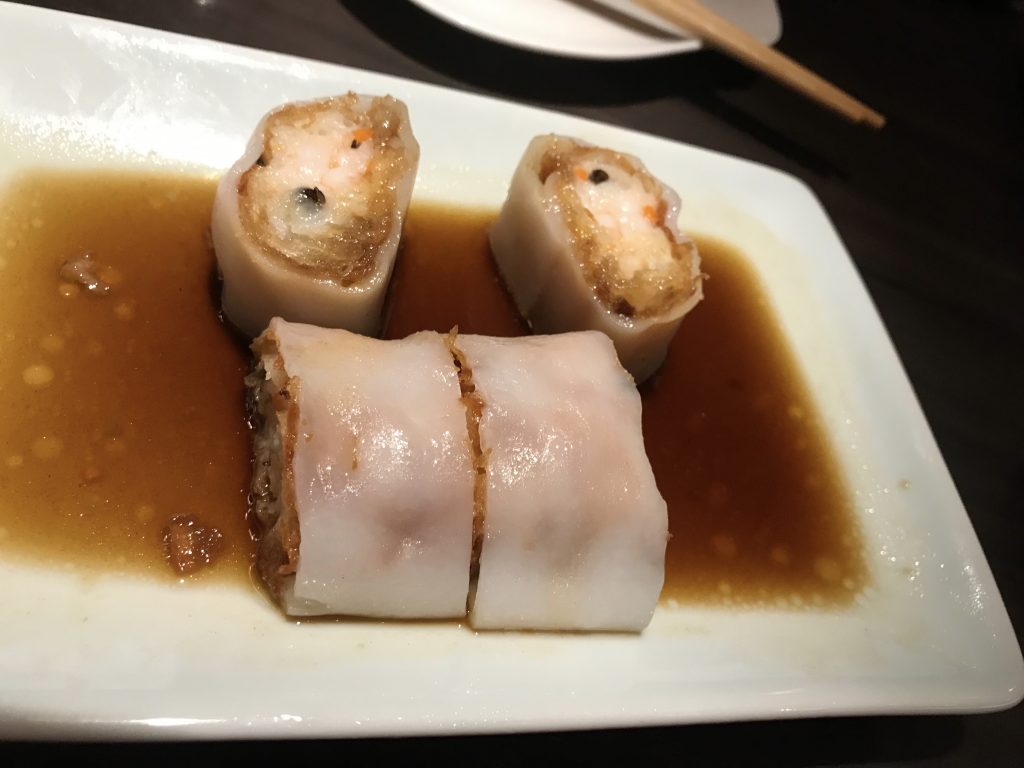 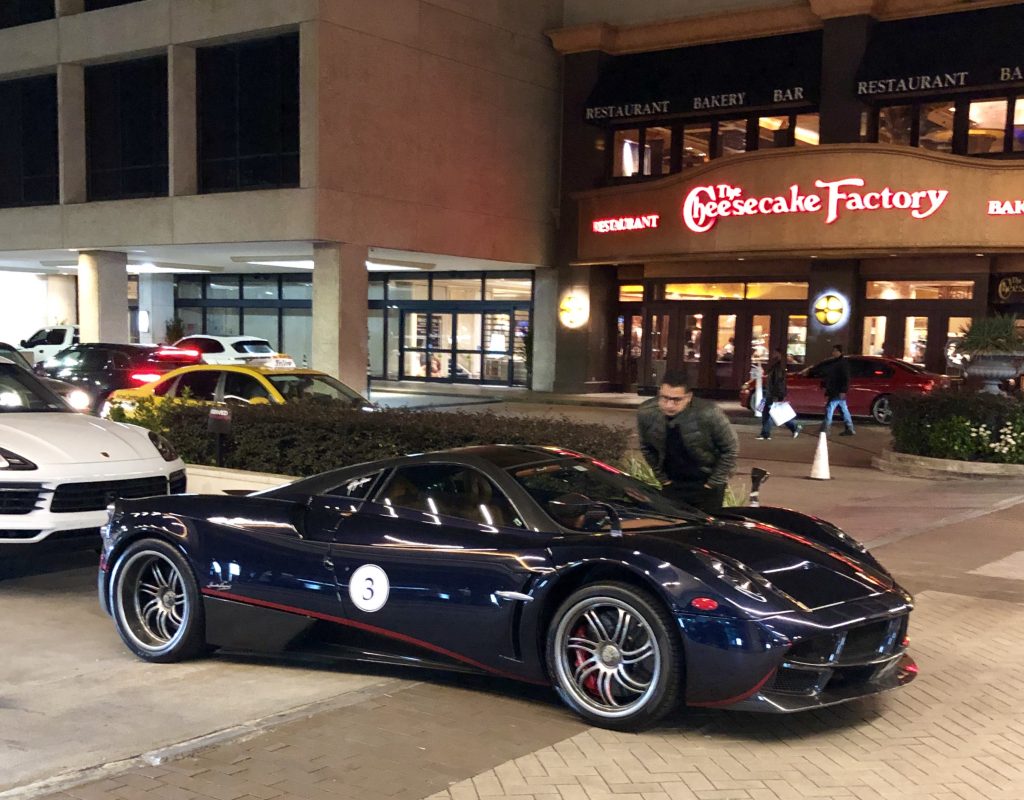 Back at the hotel, we went to their bar for a night cap.  Apparently the bar tender, Harry, is a St Regis celebrity  He has been there for 40 years and the St. Regis have named a drink after him at their hotel in New York.  I can only imagine all that he has seen and heard given the colorful history of this Houston hotel (in the 90s it was the go to place for visiting Middle Eastern Royalty, Politicians, and high class call girls).

Up fairly early the next day, we had to make a decision: do we order breakfast from room service or do we go down to the restaurant.  As we had plenty of time, we decided to go down for a leisurely breakfast. Breakfast was served in a lovely solarium with white linen table clothes.  I ordered a glass of champagne and we shared a tropical fruit platter.  A couple more double expressos then followed to accompany my smoked salmon and a waffle in the shape of Texas for SSO.  A great way to start the day. 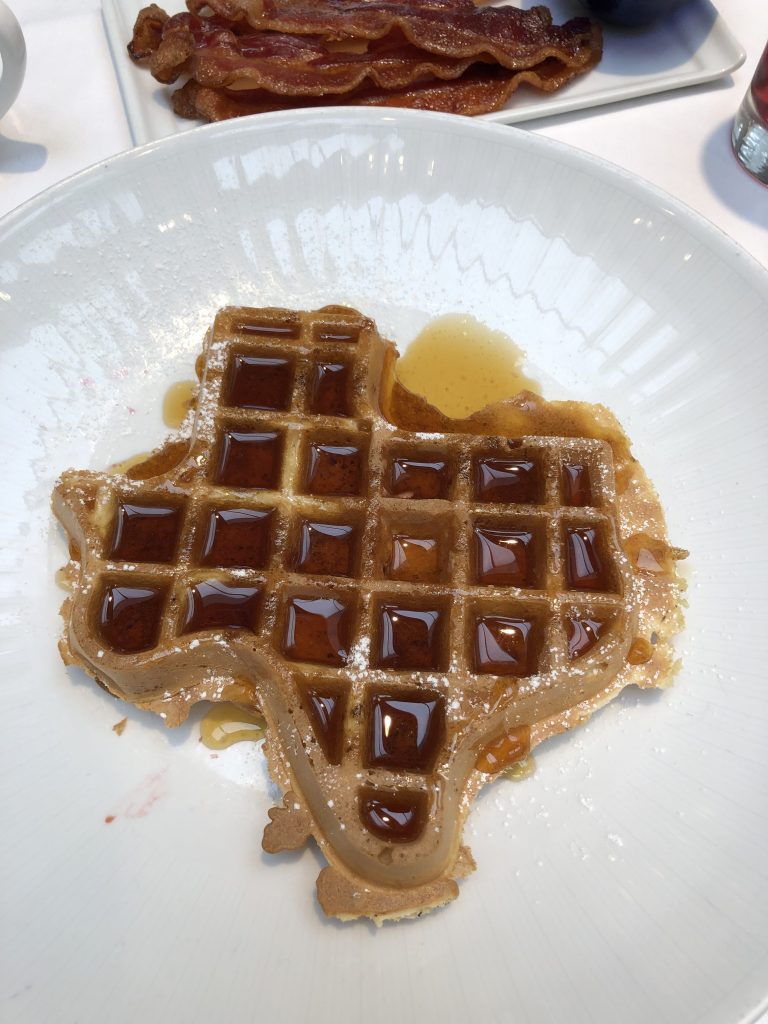 We then checked-out and dropped our two bags back into the nose of the McLaren.  This time we checked the weather in route.  All clear for for the duration and traffic was reported to be light.  Without too much trauma we sailed cleanly out of Houston.  Once clear of the city, sure enough, the rain started and continued all the way back.  At least this time the mercury was well above freezing so no fear of ice on the road.

All in, a fun weekend away but nothing terribly interesting to write home about in terms of the drive. The McLaren 650S Spider was brilliant in nasty conditions on shockingly poor roads.  What this just reinforced is how much we miss our road trips in the UK and in continental Europe. 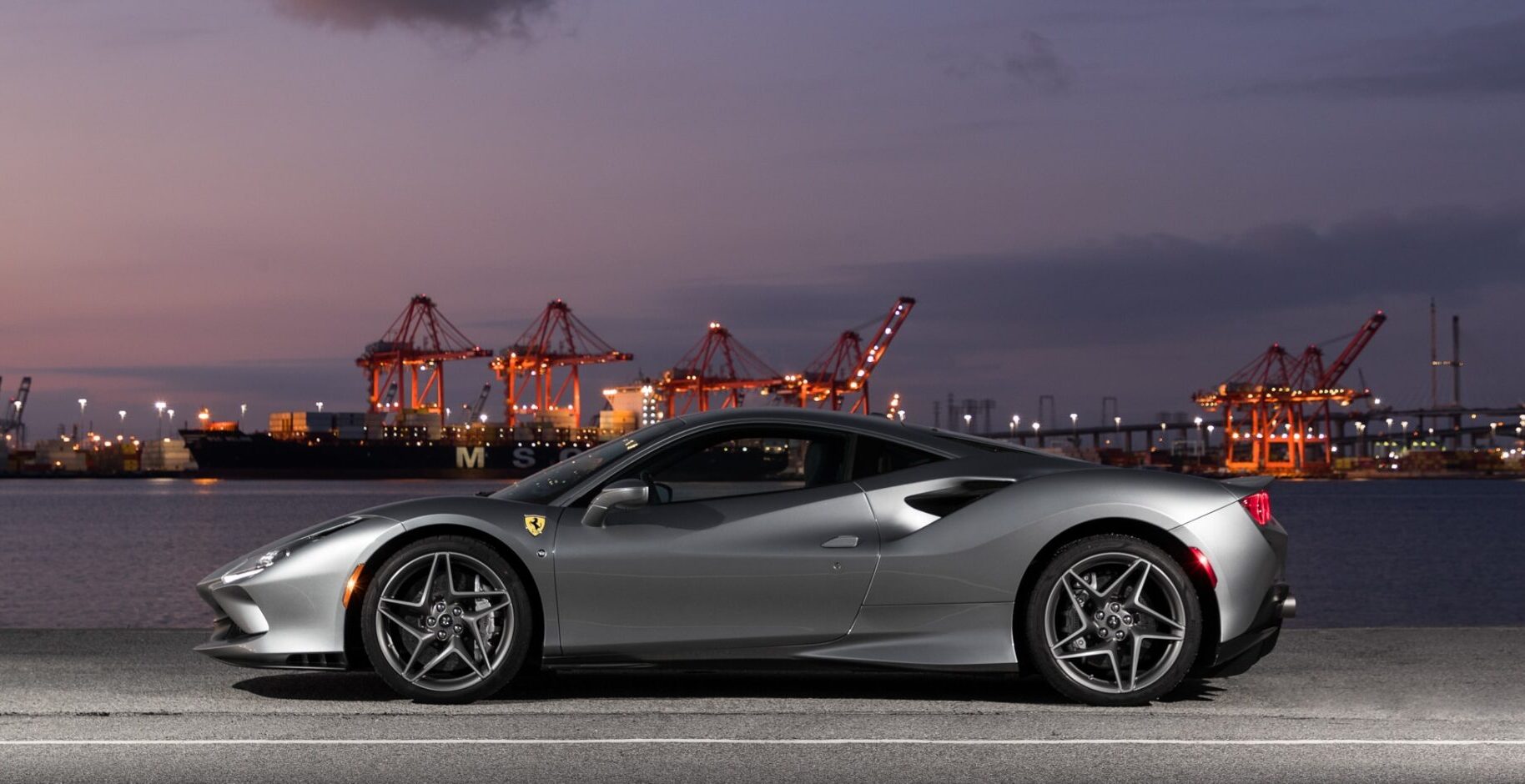 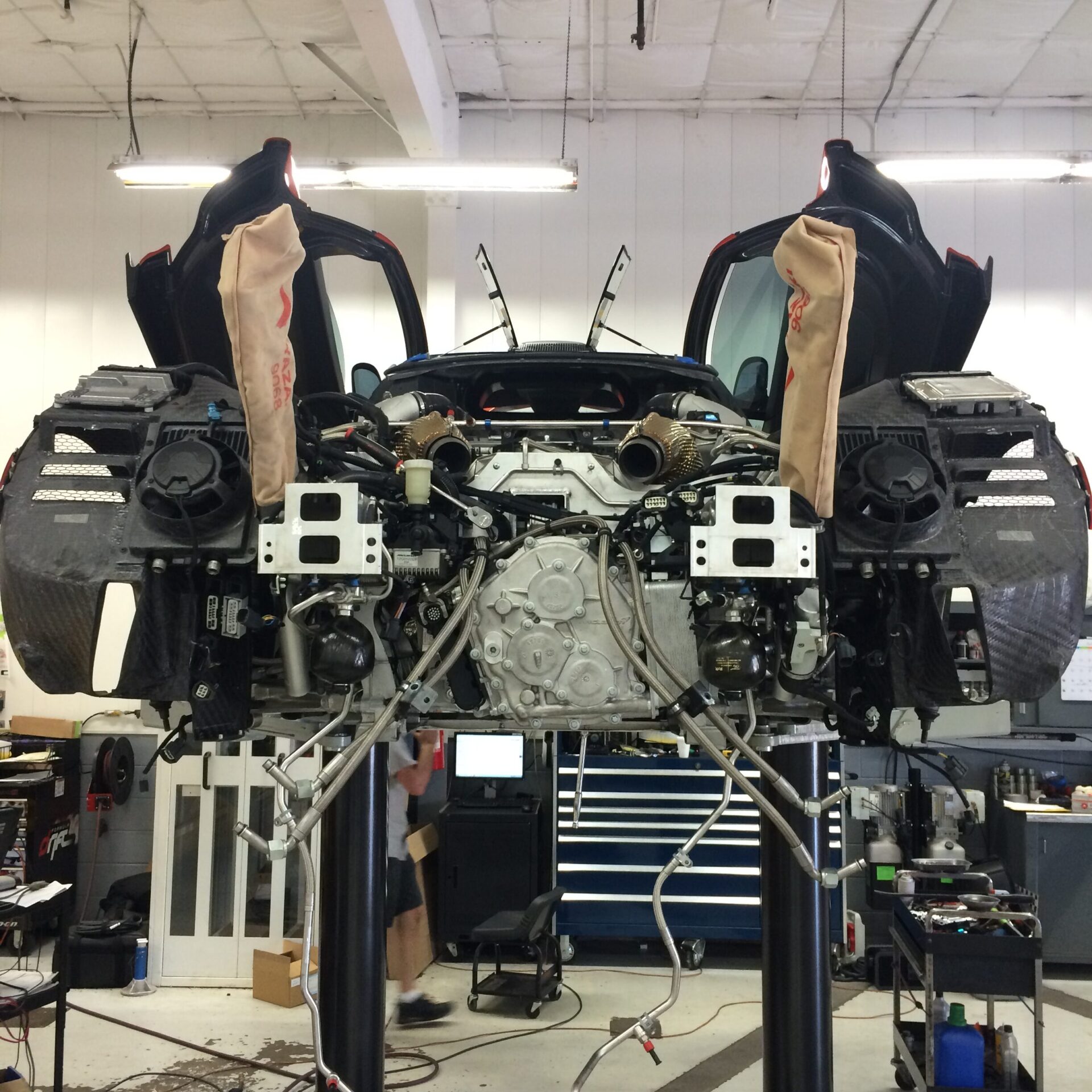