A good friend of Mrs. SSO’s, who is a bit of a petrol head, recently asked if I had ever owned any Ferraris. I told her I had owned several and then she asked how many. I turned a bit red and answered that I really didn’t know but it had been quite a few. To avoid future embarrassment, this is an attempt to document my Ferrari ownership history and provide a few insights on all the different cars. I have broken my history down into two eras, the 1st seven thru the F40 which are covered in the first article, and the final nine including the F50 follow below. 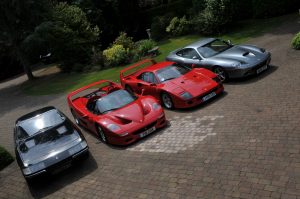 Like 2006, 2007 was another year of three Ferraris. The first Ferrari acquired in 2007 was Ferrari #8, a 365GT4 BB, SN 18201. Unlike Ferrari #4, my first 365BB, this one was LHD and needed a bit of work to get it back on the road. The first time I saw the car it was sitting on axle stands in a warehouse and it had not seen the open road in many years. A detailed inspection showed the car to be in overall good mechanical condition. The Boxer needed a major service, cambelt change, new tires, new exhaust, and a new battery. All this work took just over 3 months to complete. However, by the time the car was delivered, the opportunity to acquire an F50 had emerged and again a tough choice needed to be made. After only having driven SN 18201 once, we parted company. 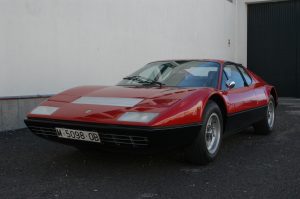 The F50, Ferrari #9, SN 106635, was in a league of its own, and to this day it remains my favorite product to roll out of the gates in Maranello. Having acquired the F40 in late 2006, the F50 was next up on my major acquisition list. The F50 had been top of mind going back to an article in EVO magazine which rated the F50 as the greatest of Ferraris modern hypercars. One test drive and I was completely smitten. In June 2007 the stars started to align and acquiring an F50 became a realistic possibility. In the end I looked at three different F50s before acquiring SN 106635 from Carrs Ferrari in Exeter. This was the start of what would turn out to be a decade long relationship with Carrs. I can’t speak highly enough of their professionalism and service. Of the three F50s I looked at, the first had a bit of questionable history, the second was at Maranello Ferrari in Egham where the salesman so put me off that I never returned, and the 3rd was the one I acquired at Carrs. We kept the F50 until we moved to the US in 2014. (article on living with the F50: https://karenable.com/living-with-a-ferrari-f50/ )The only reason the F50 was sold is there was no way to bring the car with us across the Atlantic in the near term. The alternative was to leave it sitting in storage for eight years until it would reach the magic 25 years old and be eligible for US import. Knowing how much these cars hate to sit, I thought the extended time in storage would ruin it. 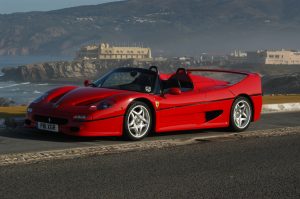 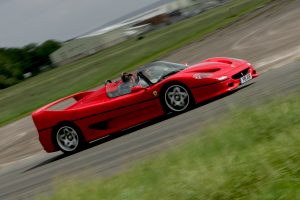 Ferrari #10, a 360 Modena, SN 125235, came along a month after Ferrari #9. The 360 was the first time I had acquired a Ferrari with the intent to use it as my daily driver. Of the models I had owned up to this point, I never really considered any to be reliable enough, with the possible exception of the 550 Maranello, to fill that type of role. Talking to a number of owners, they all indicated that the 360 was a huge step forward in terms of both build quality and everyday reliability. When SN 125235 came up for sale, it ticked all the right boxes, it was NART Blue, a 6-speed manual, and at 5 years old, mostly depreciated. The man math worked really well as I calculated the total cost (depreciation, maintenance, insurance) of running the 360 Modena as a daily driver for 3 years would be less than the depreciation on a new Porsche 911 or BMW M5. In the end, I used the 360 as my daily driver for 2 ½ years (and only sold it as we were moving to RHD UK). Depreciation turned out to be less than 10% and my only other major costs were the annual services which were significantly less expensive on the 360 than they had been on the F355. 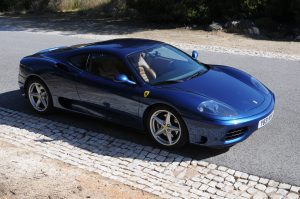 After being a bit of a serial acquirer in 2006 and 2007, 2008 slowed down significantly. Ferrari #11, a 365GTB/4 Daytona SN 13343, was acquired as a project late in the year. It was an opportunistic purchase as the dealership wanted to get it off its books post the great financial meltdown that year. The Daytona was in need of a bare metal respray and extensive work on the brakes and suspension. Immediately upon purchase it was dispatched to a restorer’s workshop in Wales where it would spend the better part of a year. Al Wilsher did an amazing job on the Daytona and the car that emerged had little in common with the unloved basket case that was delivered to him. We ended up keeping the Daytona for a couple of years before moving it on to make way for the Jaguar XJR-15. Article on what is like to drive the Daytona: https://karenable.com/drivers-seat-ferrari-365-gtb-4-daytona/ 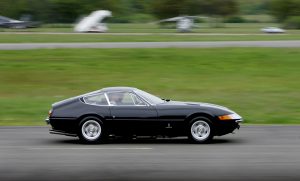 Ferrari #12, a 575M Maranello, SN 136324, was the second Ferrari we purchased as a daily driver. This happened in late 2009 and was in conjunction with a move to the UK. In effect the 575M replaced the 360 Modena as my daily transport. SN 136324 was a 6-speed manual with the Fiorano Handling Package making it a fairly unique 575. The Fiorano Handling Package stiffened the car up significantly. This certainly helped with high speed handling but didn’t do much for its usability on the crappy roads in our area. The 575 was a car I liked but never really fell in love with. In fact, I prefer the earlier 550 to the 575. The 575 was sold by Carrs Ferrari to Chris Harris, later of Top Gear fame, to make room for the Mosler MT900S. 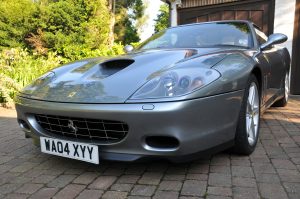 Ferrari #13 and #14 were a package deal and arrived in 2012 after a several year Ferrari buying hiatus. We traded a Koenigsegg CCR in for both a 612 Scaglietti, SN 141407, and a 430 Scuderia, SN 168655. The main driver of the trade was as we had ended up in a situation where we owned quite a few supercars, none of which were really usable on long road trips without risk of marital strife and having to live in the same cloths for multiple days due to the lack of luggage space. The pair provided great flexibility of choice between raw focused performance and high-speed comfort. One of the most memorable road trips we have ever taken was up to western Scotland with both the 612 Scaglietti and 430 Scuderia. For covering long distances, the 612 is in a league of its own. On back country roads, the 430 Scuderia is just epic to drive. The 612 is now owned by a friend in the UK and the 430 Scuderia ended up being traded in for our 1st McLaren, a 12C Spider. 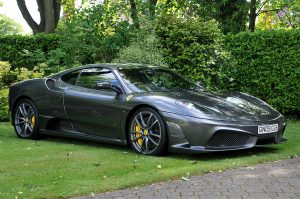 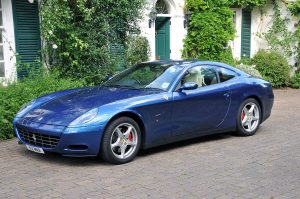 Ferrari #15, a Scuderia Spider 16M, SN 168937, landed on the driveway in late 2014 in conjunction with our move from the UK to Texas. Acquiring a 16M was not the original plan. Originally, we were looking for a Porsche Carrera GT but after that deal went badly wrong, we switched gears and went back to looking for a Ferrari. As I still had very fond memories of the 430 Scuderia, the Spider version in temperate Texas seemed like a good choice. Reality turned out to be quite different. The horrible concrete jungle of flat straight roads that comprise the transportation network of North Texas did little to bring out the best in the 16M. Article comparing the Scuderia and 16M: https://karenable.com/ferrari-430-scuderia-vs-16m/  The furnace like summers combined with nowhere nearby to enjoy the 16M resulted in it seeing little usage. As we never really bonded, the 16M was traded in for the McLaren 675LT Spider in 2016. 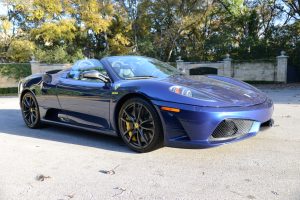 Ferrari #16, a 599 GTB HGTE, SN 169885, arrived in late 2016. As we had several children who had all conveniently parked themselves at different colleges all across the Northeastern United States this seemed like a good excuse to get a 12-cylinder GT again. I had been interested in the 599 GTBs for quite a while and even looked at a few 599 GTOs in years prior. When a TdF Blue 2010 599 GTB HGTE came up for sale I immediately went after it. It did serve as our college road trip car for a couple of years before it was time to move onto something new. The original plan was to trade it in for a F12. After the insultingly low offer from Boardwalk Ferrari, the plan changed and the 599 GTB HGTE was traded in for our McLaren 720S. 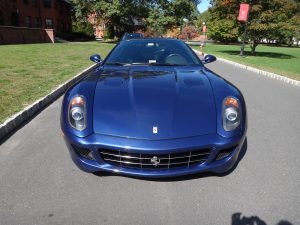 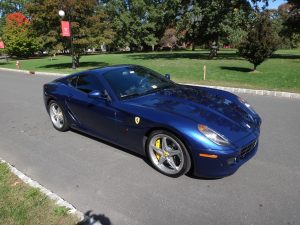 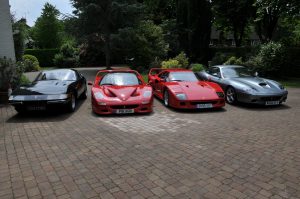 I have enjoyed this journey that you have taken us on, it has been great. I have been watching what you put up on the web for several years now, so this was lovely to see it all (from a Ferrari perspective).

Many thanks. Would love to get another F50 but current prices are well out of my range.