I recently realized that the one car we owned for multiple years that I’ve never really written anything about is the Ferrari 360 Modena.  We had the 360 for almost 3 years and during this time it served as an occasional daily driver while getting pressed into duty for multiple highly memorable road trips.  For its entire life with us, the 360 Modena was the “workhorse” Ferrari alongside the F40 and F50.  Having owned both the prior model, a F355 GTS and the ultimate incarnation of the car that succeeded it, the 430 Scuderia, the 360 Modena was definitely a huge leap forward on its predecessor. As the first of the modern aluminum spaceframe Ferraris, it brought a number of both revolutionary and evolutionary improvements to the Ferrari mid-engine V8 line. 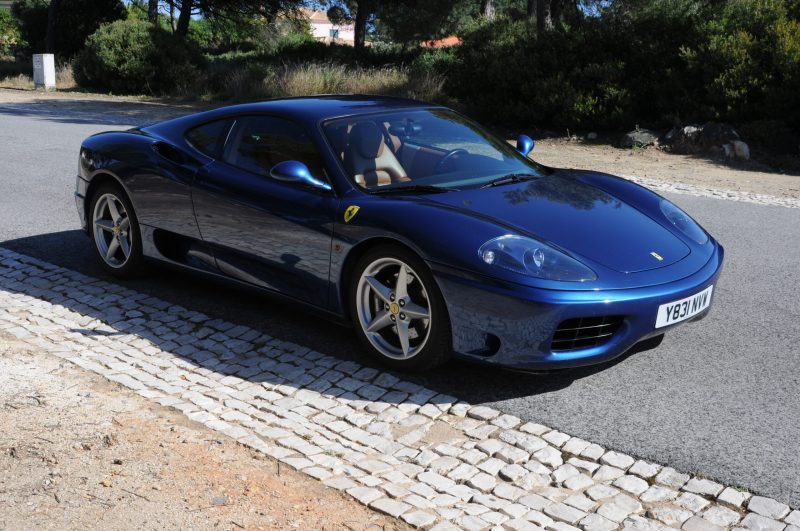 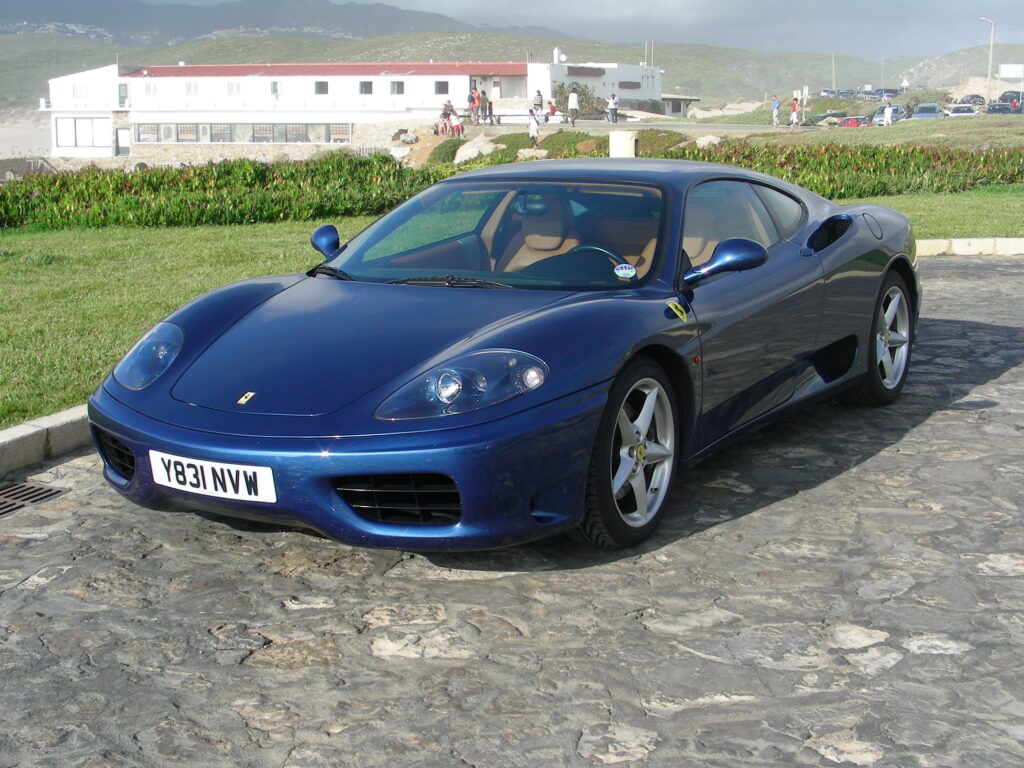 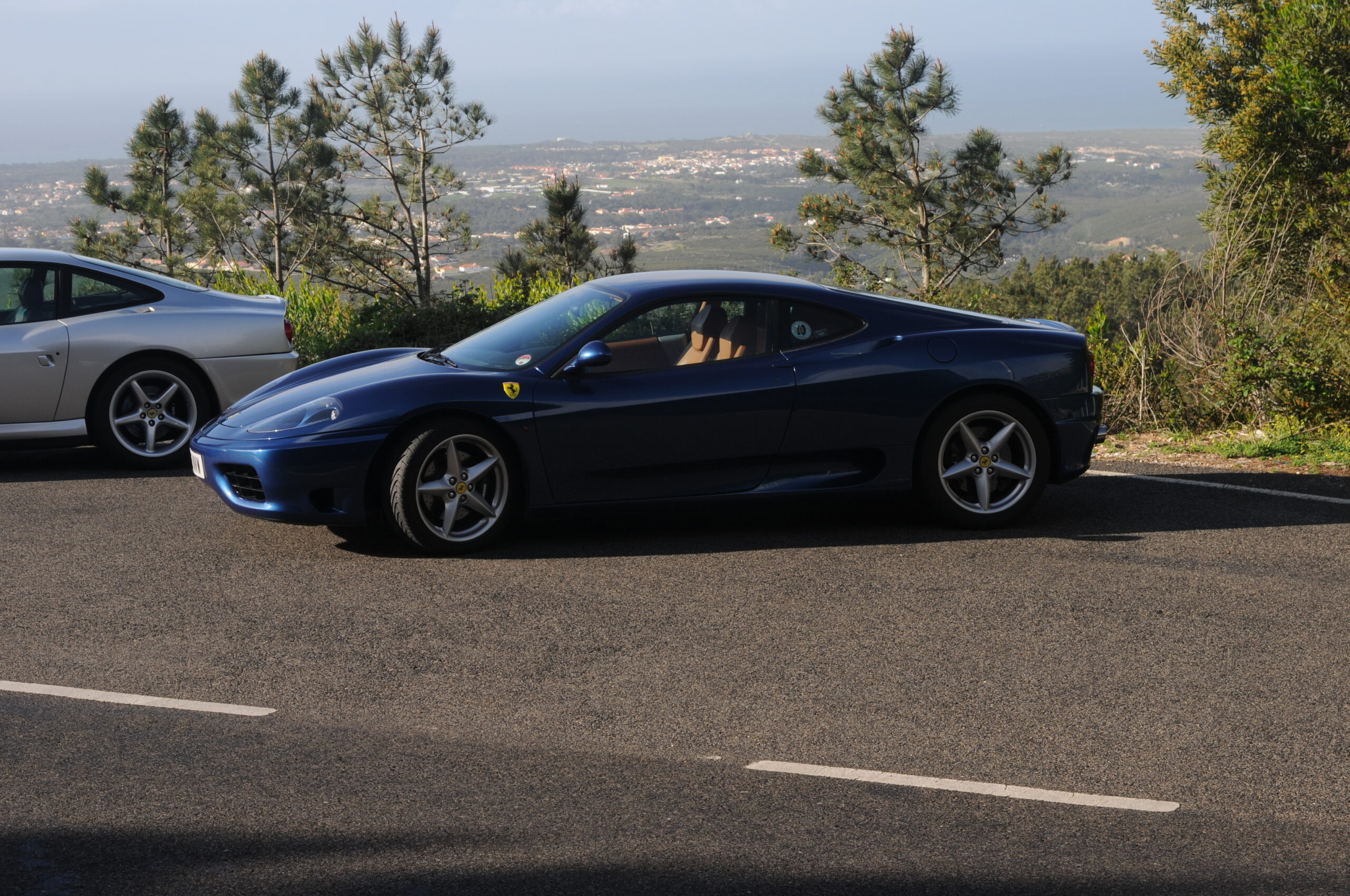 The 360 Modena was launched at the Geneva Motor Show in March 1999 as a replacement of the flawed but beautiful F355.  The 360 Modena was the first Ferrari road car to sport both an aluminum body and aluminum spaceframe.  The result of this almost total use of aluminum is a 28% reduction in weight vs the F355 while providing over 40% increase in structural stiffness.  Ferrari set up a partnership with Alcoa Aluminum to develop the new technology and processes needed to produce the aluminum bodies.

The 360 Modena also marked a significant shift in styling from the F355 towards a primary focus on aerodynamics.  The smooth flowing lines of the 360 hide the fact that it is a significantly larger car than the F355.  It is the first Ferrari to drop the classic nose mounted radiator grill.  The twin radiators are now mounted in the wheel arches.  The radical redesign allows for the inclusion of a large luggage space in the front while delivering high speed downforce more than four times greater than that generated by the F355.

The 360 also received a new larger, engine with capacity increased to 3586 cc.  Power was up to 400bhp with improvements in both mid and low range torque.  The new engine kept the valve count at 5 valves per cylinder, as per the F355, incorporated variable phase timing for the exhaust valves, plus improvements in the combustion chambers.  However, the most significant change was the incorporation of a new variable geometry system which independently manages both cylinder banks.  The high maintenance cambelts are carried over from the F355 but are no longer an engine out job to change every few years.  It was also the first Ferrari designed to be fitted with either a manual or a F1 gearbox.

Pull out into the clear road and the first thing that impress about the 360 is the power jump over its predecessor. It’s only about 40bhp more than the F355 yet the difference is quite tangible given the cars greatly reduced weight. The engine spins up very, very rapidly and it’s easy to hit the rev limiter if you’re not measured with your right foot.  The manual gearbox is smooth, but the clutch is on the light side.  The bite point is quite precise and much easier to hit at speed then when first moving off.  Personally, I prefer the heavier, meatier, set ups in the earlier Ferraris.   The steering in the 360 is better weighted than the F355 and provides more feedback although I still prefer the 430s set up.  In the F355 the steering is “over-assist” and its lightness can be discomforting when pushing the car towards its limits.  In fact, it is at high speed where you really notice the difference, the F355’s front has a very annoying habit of going light at high speed.  If you press on, it gets even lighter.  The F355 does not impart the same sort of confidence at very high speed as the 360.  In the 360 the car feels stable and confidence inspiring even on a very high-speed run down the autobahn.

While high speed runs can provide a bit of fun, it’s really driving along windy country roads that the 360 comes alive.  The steering is direct, and the assist leaves you just enough “feel” for what the car is doing. However, the 360’s suspension set up is quite stiff and you do feel all the bumps and cracks on the road.  The brakes for their generation are quite good and you really need to be working them hard with little sympathy to be getting any fade.

We did three major road trips with the 360 Modena during our time together.  The first was what turned out to be the inaugural, of what would become an annual, “Epic Drive” (full story: Epic Drive) with a close group of friends.  The next 360 road trip was the 2nd of the “Epic Drives” and it took us to Switzerland for 5 days of driving the alpine passes. The final road trip took us back to France again but this time out to the west and south.

Alpine passes require a different driving style to other roads or to the track. If you want to be quick, you need to be very smooth.  Listening to every piece of feedback you can soak out of the car is critical.  Keeping the car balanced is key and corners are an exercise in slow in, fast out with braking being on the early side and done smoothly.  When entering the corner, the car needs to be perfectly neutral.  Hard late breaking will unsettle the car and you will end up fighting it all the way around the hairpin.  It’s a dance, not a wrestling match.  Getting it right does take practice and I do remember improving each day.  My other takeaway from this trip, after 5 days of chasing a 430 Scuderia up and down mountains, just how much quicker the combination of a great F1 gearbox pared with massive ceramic brakes enabled that car to be.  The 360 Modena was hard work to drive well in the mountains while the 430 Scuderia just flew. My good friend who piloted the 430 Scuderia always exited his car looking relaxed when we would stop for a break, I on the other hand, looked like I had just had a good work out. In fact it was on this trip that I decided that a 430 Scuderia would one day need a spot in our garage (430 Scuderia: Driver’s Seat).

The final of the three 360 Modena road trips started in Normandy before heading out to Brittany and then down into South West France.  The “D” roads in France bring out the best in the 360, long sweeping curves cutting through both fields and forest as you progress from one town to the next.  It’s almost all 3rd and 4th gear territory as you click the leaver back and forth between the two.  You quickly learn to move at no more than the posted limit as soon as you hit the outskirts of each town as there is normally a speed camera strategically located immediately after the 50 km/h speed limit sign.  The ancient narrow streets of Nantes and Saint-Nazaire highlighted the girth of the 360 Modena and maneuvering through both was quite intense in places.  My two most vivid memories from this trip were being warned ahead of time by the hotel in Brittany to try to be quiet upon arrival (interesting ask for a Ferrari 360 with a Tubi exhaust) as they had strict local noise ordinances and getting caught in a torrential downpour on the road to Bordeaux.  If I had been in the F355 GTS, we would have had to pull off the road and wait out the storm.  In the 360, we just slowed down and pushed on.  Even with a huge rooster tail of water shooting up behind the car, the 360 felt planted and I knew what the front end was doing. 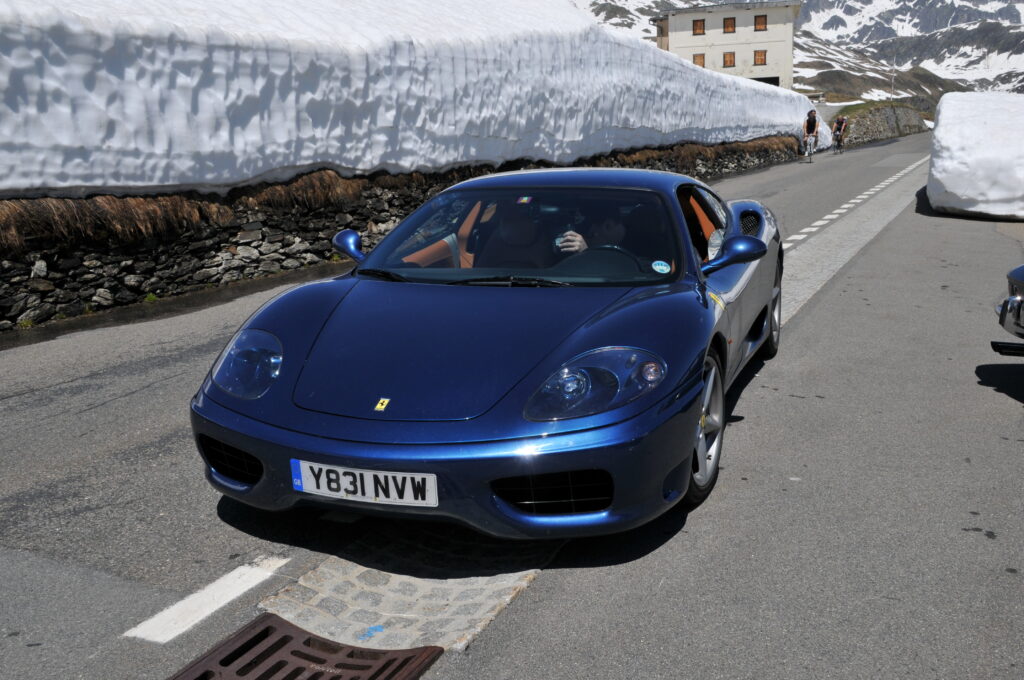 Looking back now, the 360 was a great leap forward vs. prior Ferraris in terms of dependability, maintenance costs (Ferrari Maintenance Costs) and usability.  Having said that, the 360 wasn’t quite there yet in terms of a no stress daily useable Ferrari.  I still found myself always checking the temperature gauge and the clutch was not that easy to use in heavy traffic.  Random warning lights were a regular occurrence but when it was running well and on the right road, the 360 Modena was  joy to drive. 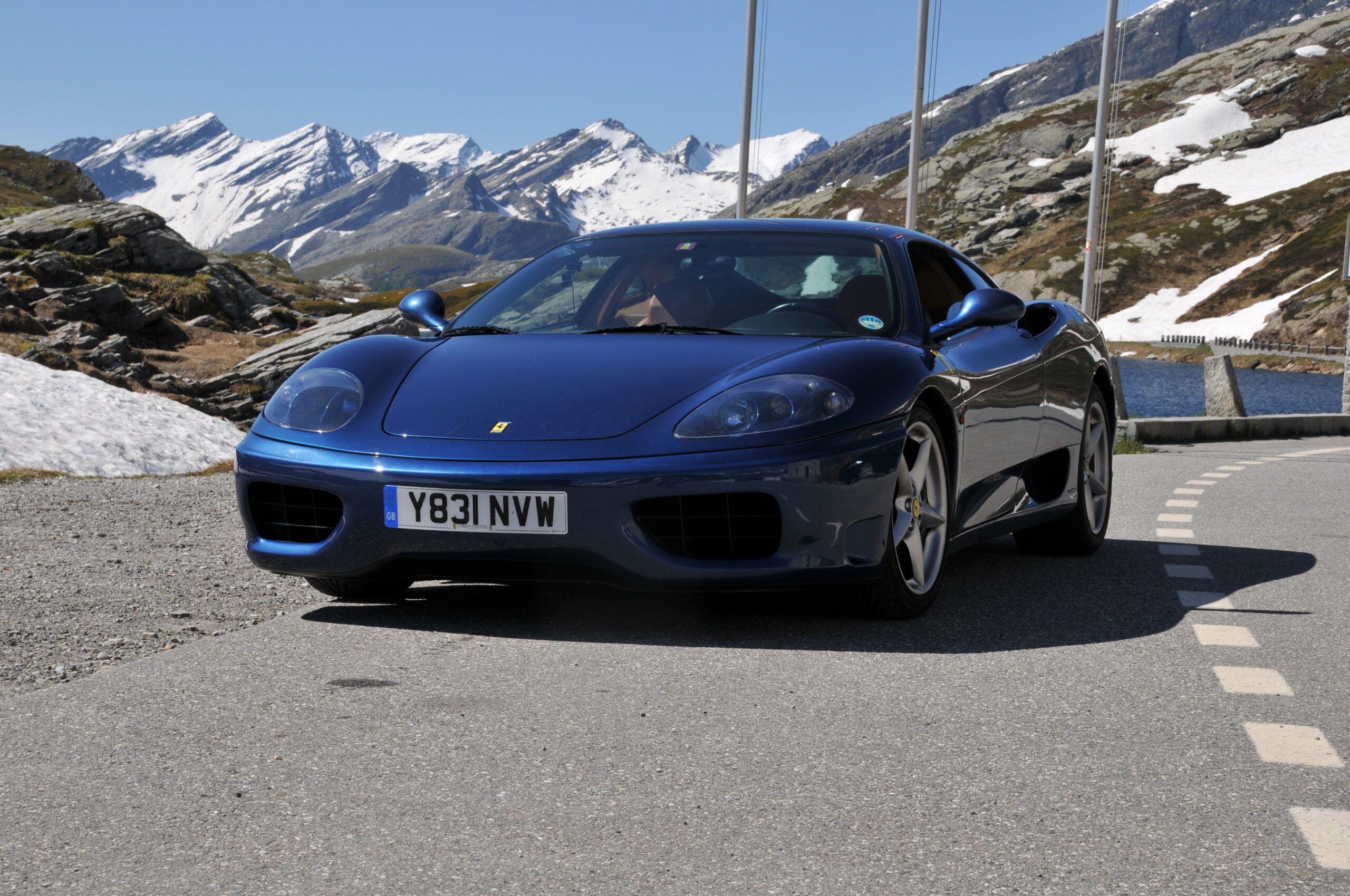 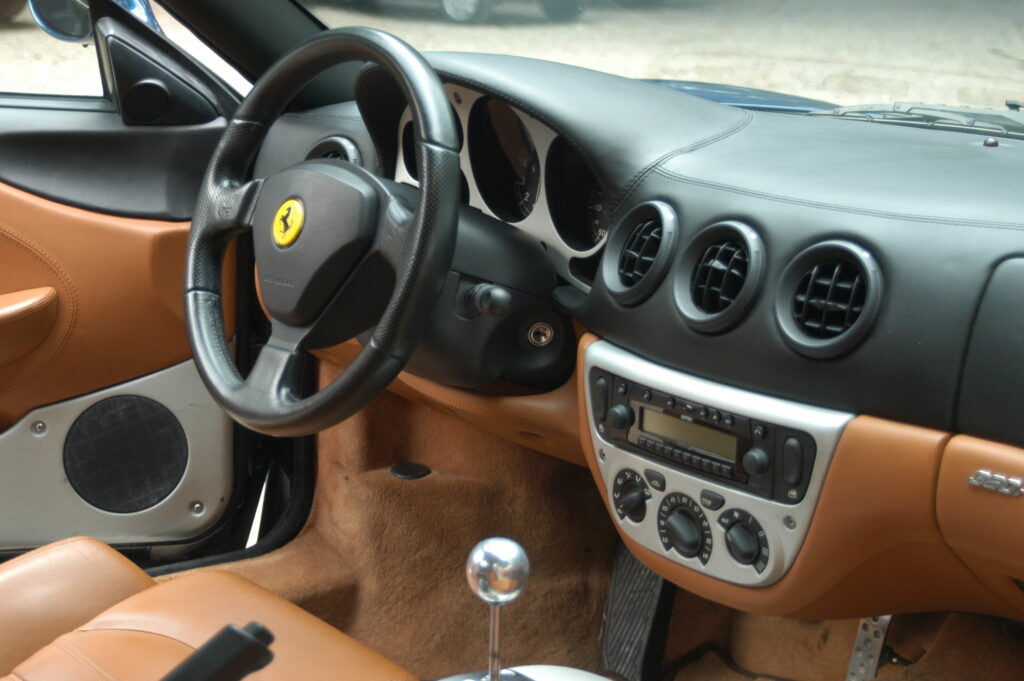 Thanks for sharing. The used market appears to be treating the 360 as the 996 911, squeezed between two highly successful cars (355 & 430) and only seem to be getting lukewarm praise. For those reasons I have been wondering if it could be the perfect target as a first Ferrari, especially since 355 prices have completely skyrocketted.

I definitely believe a 360 would make a very good first Ferrari. In many ways its an even better choice than a F355 as it will be less costly to run and build quality is significantly improved.

I have a 2002 360 Spider F1, 10,000 miles. Absolutely fun fun fun to drive.
Enough get up and go to get the heart pumping….pleasure around curvy roads….radio not so good…engine sounds better. I am a 360 guy all the way…I want a fun, reliable drive and the 360 delivers everytime.

Interesting write up. I’ve been quite fond of the 430 Scuderia and the 550 Maranello. Both cars have their uniqueness as well as a purpose. I’ve read both of your articles about your ownership of each car, and to my surprise, I have yet to consider a 360 Modena. Although the 430 Scuderia provides more of a driving experience its not a car I want to take to the grocery store. While the 550 Maranello, on the other hand, is a comfortable car for long road trips it does not sit very well in bumper to bumper. That being said my go-to would be the 550 Maranello, only since the 430 Scuderia is not a stick. Now I have yet to drive the only converted 430 (from European Auto Group) which may change my opinion, but next time I get the opportunity I will have to give the 360 Modena a spin.